what is a wave?

Before dealing with radio waves and their use in the activities of telecommunications operators, we should be familiar with the concept of a ‘wave’ itself: a natural, physical phenomenon found everywhere in daily life and in many different forms.

What is a wave?
In physics, the word “wave” refers to the transport of energy without matter being moved. It is a disturbance or agitation that moves through a given environment that, having passed, leaves it in its original state. This mechanism covers a wide range of situations – from waves on a liquid surface to light, which is itself a form of wave.
The transport of energy without matter is a common physical phenomenon. Let’s imagine a pond on a sunny day with no wind. The water surface is perfectly smooth. Now imagine that someone throws a pebble: at the point of impact, we immediately see ripples forming that seem to move outwards in concentric circles. After a few moments, the pond is smooth and still once again.

Energy converted into oscillation
What happened? The pebble thrown created a disturbance in the water, which in absorbing some of the pebble’s energy then spreads it around. The water is made to move up and down – each ripple causing another ripple, that is to say, transferring some of the energy to its neighbour.
Once the energy supply of the pebble is dispersed from wave to wave, the surface of the water returns to its original state. The height, distance and duration of waves depend on the energy initially imparted, in other words on the mass of the pebble and the force with which it was thrown.
These oscillations (or “waves”) on the surface of the water are the simplest and most direct way of “seeing” waves. But there are many other types of wave that follow the same principle but are invisible to the naked eye. 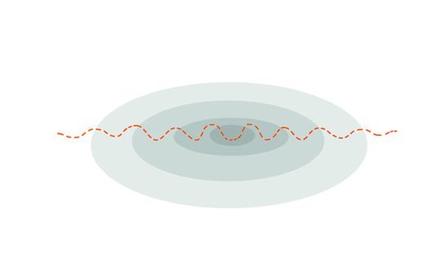 Fundamental characteristics
All waves can be described by three features: