Your questions about 5G and health

Is 5G a health risk?
5G uses known frequency bands for which the health authorities have issued advisories.
The World Health Organisation (WHO) recommendations cover exposure limits from 0 to 300 GHz. WHO has concluded that exposure linked to wireless networks and their use does not cause adverse health effects if this exposure is below recommended limits.
Below the limits defined by WHO, international and national health agencies agree that the radio frequencies used for telephone services are harmless.

In Europe, the Scientific Committee on Emerging and Newly Identified Health Risks (SCENIHR) issued an opinion in February 2015:

“According to the results of current scientific research, no adverse effect on health has been established if exposure remains below levels fixed by standards in force.” 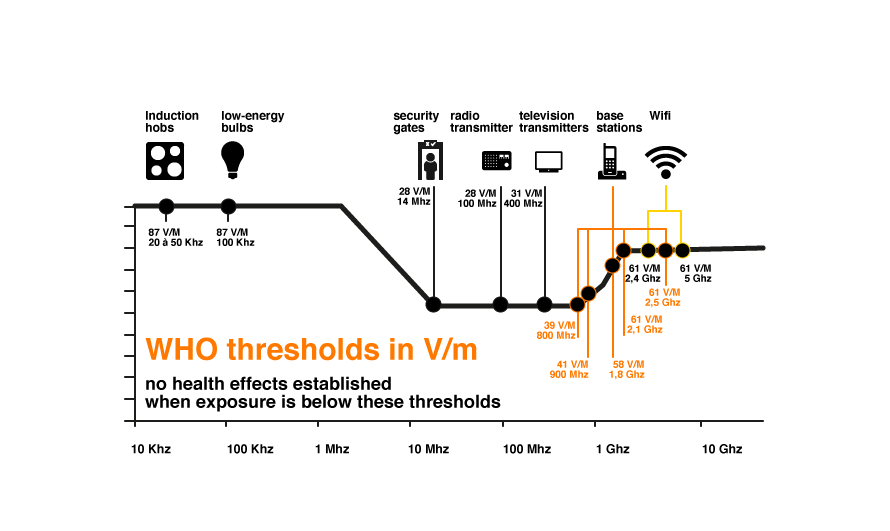 For 5G mobiles, the regulatory limits are the same as for 2G, 3G and 4G: SAR below 2 W/kg.
The thresholds have not changed following the publication of ICNIRP

How are these thresholds verified?
Global standards for 5G exposure measurement methodologies have been published by the IEC (International Electrotechnical Commission). They are a reference implemented by different countries using 5G.
ICNIRP (International Commission on Non-Ionizing Radiation Protection) defines the thresholds, WHO (World Health Organisation) works on the recommendation of these threshold values. In Europe, they have been recommended for the general public since July 1999 and a directive was published for workers. In France they have been legally recognised through a decree dated 3 May 2002.
These thresholds are regularly verified from a scientific point of view by health authorities such as SCENIHR (Scientific Committee on Emerging and Newly Identified Health Risks) or ANSES (fr).
Standardisation organisations:

For antennas, exposure to radio waves is controlled at national level. In France, the ANFR (Agence nationale des fréquences) is responsible.

For mobiles, suppliers measure the Specific Absorption Rate (SAR) which must be indicated in the user guide. Some countries like France carry out random SAR checks in stores via the ANFR.

The WHO’s IARC classified RF (radio frequencies) as possibly carcinogenic to humans. Does this apply to 5G?
The WHO’s IARC classified Radio Frequencies (which includes 5G) in the ‘possibly carcinogenic to humans’ group, which is a group where the carcinogenic risk is neither proven nor completely excluded. This group includes many other substances, including pickles or aloe vera… So we need to take a holistic approach to this classification.

The only usage precautions recommended by the health authorities include intensive use of mobile phones against the ear, regardless of the technology used (2G, 3G, 4G, 5G). A good mobile telephone network with a high connection quality as well as optimisation of mobile phones for the lowest possible radiation are also recommended.
Orange has published usage recommendations – Your Mobile section.

Some scientists have called for a moratorium on 5G, is this necessary?
Since the development of 5G was announced, some people have voiced concerns regarding the health risk of 5G. Their arguments include cancer, neurological disorders, reproduction, electro-sensitivity, well-being… These are not new and were already put forward following the deployment of 2G, 3G and 4G from the 1990s onwards. These arguments have been considered in a large number of studies and refuted by the majority of national and international health authorities.

The 26-28 GHz band frequencies which will be used for 5G use millimetre waves. They ensure improved speed and lower latency.

Currently, in Europe, these frequencies are not allocated and therefore are not used for commercial purposes.

This frequency band is already included in health advisories and reports and in regulations on radio waves in Europe and France.

The exposure threshold that must not be exceeded is 61 V/m. Below this threshold, the international and national health authorities believe that there is no health risk.

This frequency band is not new, and is already used by other services which can be viewed on the ANFR frequencies guide.

The WHO database includes over 350 studies on these frequency bands. For future 5G frequencies, various research has been conducted on other applications using these frequencies which have used them for several decades at much higher power levels than mobile telecommunications. There has been no indication of any health risk due to exposure to the levels linked to mobile communications.

However some health authorities including ANSES in France and BFS in Germany recommend continuing research on this frequency range, notably for the telecoms industry.

5G will use active phased array antennas (or adaptive antennas). What are they? Are they already in use? Have their effects on health and the environment been verified?
All mobile telephone antennas must adhere to current regulations in terms of exposure to waves. The same applies for the new generation of so-called “adaptive antennas” or “active phased array antennas”.
They are able to target the effective radiated power towards users and on request. This has two advantages: removal of unnecessary waves around users; and on the other hand, more efficient use of energy, which is better concentrated on essential use.

Antennas are able to locate the mobile to determine the optimum direction for the customer. The network does not “know” the telephone’s position at any time, but it knows the correct direction to communicate with it. 5G will be more precise and less diffuse.
In France, adjustments and upgrades are being made to this new technique through tests conducted by operators in cities, supervised by ANFR (French Frequency Regulatory Authority). With a precautionary approach in mind, antennas are deployed with an increased safety factor for exposure. Like all mobile telephone antennas, this new generation of active antennas respects regulations in terms of wave exposure.