The limit values of human exposure to electromagnetic fields for all the devices and services that emit radio waves were proposed by the ICNIRP in 1998. These values were established on the basis of a comprehensive analysis of available scientific knowledge.

In this respect, the only known biological effect is heat transfer. It occurs when the energy absorbed by the body, which is measured by the Specific Absorption Rate (SAR), is greater than 4 W/kg for the entire body and 100 W/kg for the head and torso (with localised absorption of higher levels – local SAR).

To reflect any uncertainties and to have a safety margin, a safety factor of 50 is applied to the values above, so as to define the limit values of public exposure, namely 0.08 W/kg for whole body, and 2 W/kg for head and chest.

The recommendations of the ICNIRP (opens in a new window), which are the basis in particular of European regulations, are reviewed regularly. The current exposure limit values have not been challenged by recent reports of the ICNIRP and the Scientific Committee on Emerging and Newly Identified Health Risks (SCENIHR (opens in a new window) – independent committee placed 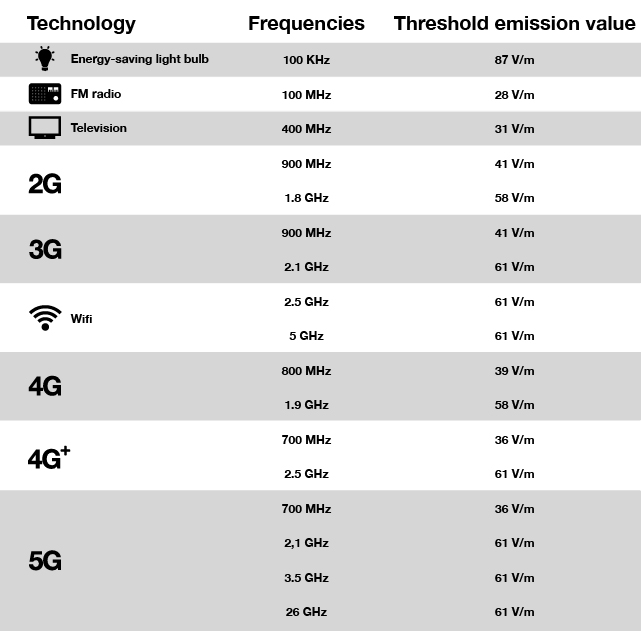 Some countries have chosen other more stringent thresholds but there is no evidence that public exposure will be lower. Similarly, there is currently no scientific evidence that stricter thresholds have any health benefit.

International limits have also been defined for employees, with a safety factor of 10. DIRECTIVE 2013/35/EU OF THE EUROPEAN PARLIAMENT AND OF THE COUNCIL, dated 26 June 2013, applies these limits as a minimal health and safety standard for employees exposed to risk s arising from physical agents (electromagnetic fields).
The Directive covers all of the known direct and indirect biophysical effects of electromagnetic fields (thermal and non-thermal effects, limb currents, interference with electronic devices and equipment, etc.), but does not address the potential long-term effects of exposure due to the fact that there is currently no conclusive scientific evidence establishing a causal relationship. It does, however, stipulate that the Commission will take any changes in scientific knowledge of the issue into account.
The Member States have until 1 July 2016 to transpose the Directive.