The deployment of 5G

The implementation of 5G depends on several technical solutions, which will be put in place gradually.
5G mobile antennas will eventually use 3 frequency bands.

The 700 MHz band, already used by some operators for 4G, has the benefit of enabling a good penetration inside buildings and good coverage with speeds comparable to those of monoband 4G.

The 3.6 GHz (3.4 – 3.8 GHz) band helps to significantly ramp up speeds despite lower penetration inside buildings and lower reach than the 700 MHz band.

The 26 GHz (24.25 – 27.5 GHz) band is the highest frequency used in mobile technology and it can deliver very high speeds, comparable to those of FTTH (Fibre). On the other hand, its ability to penetrate buildings is very low as it cannot go through obstacles and its reach is limited to a few hundred metres.

With the combination of these 3 bands, speeds could go as high as a theoretical maximum 10 Gbps. 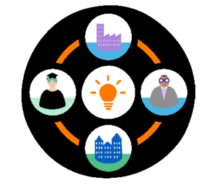 Orange plans to conduct tests for 5G in the areas already authorised by ARCEP the national telecoms regulators, as in France for example.

This smart antenna, which consists of a large number of miniaturised antennas, makes it possible to achieve speeds and a transmission capacity that are currently not available with 4G.

It makes it possible to direct the radio signal to users and devices whenever necessary, rather than transmitting all the time and everywhere. Any superfluous waves around users are therefore considerably reduced or even eliminated.

Over time, it will be possible to add other radio sites to meet local capacity requirements or to deploy fixed wireless access offers.

The experimental 5G antennas will be smaller than those currently in use and will be subject to the same obligations of information and installation, including in terms of security and safety. A security perimeter compliant with the regulatory thresholds for exposure will be defined during installation.

With regard to: 5G – waves and health

There are more than 3,500 scientific publications (studies, reports, advice…) concerning the full range of radio-frequencies globally, of which a majority deal with mobile telephony.

The major international health authorities (WHO: the World Health Organisation) and the EU Scientific Committee, as well as national bodies in influential countries (Germany, France, United Kingdom, Canada, Spain, the Nordic countries…) all arrive at the same conclusion:
there is no scientific evidence of a proven risk to health providing that exposure to radio waves remains below the levels recommended by the WHO.

These limits are frequently reassessed by these various health authorities.

5G radio waves (700 MHz and 3,500 MHz) for France have been used for over fifty years by everyday services such as the television.

The waves used by 5G are therefore the same as those used by television, radio, existing mobile telephones and other widespread services such as public transport cards.